In the late 1990’s I began a series of works using text as the basis.

‘Book’ was a written sculpture, only existing as a one off copy. ‘Complete and Utter Bollocks’ and ‘A Question of Balance’ were also sculptural in appearance, while ‘Face’ and ‘Bullshit’ were more like booklets, (though ‘Face’ was also presented as a ‘drawing’). I also produced a large series of works based on my signature, using it in varied ways to produce ‘art’. A series of A4 printed ‘sentences’ called ‘Fresh Sentences’ was touted around Old Spitalfields Market and sold for 1 pound each in a performative nod to Moondog in the way he performed and sold his music on the streets of New York. Some of this work was exhibited and made available through Tanya Peixoto’s ‘bookartbookshop’ (London) in 2002 in an exhibition called ‘In Black and White’. 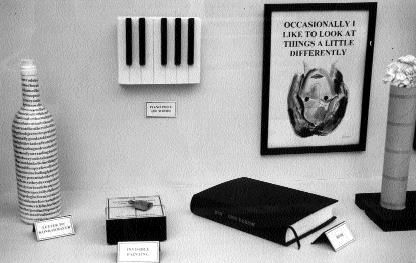 My second book ‘One Hundred to One’ was written in 2000, and like with ‘Book’ its formal qualities were more important than the literary, insomuch that the look was more important than the content. The idea was simple; start page one with font size 100 and reduce the font size on each subsequent page until page one hundred used font size 1. All I had to do was basically fill in the void with words, which was done without punctuation of any kind except a full stop at the end. The overall book resulted in almost 145000 words, many of which were on page one hundred at font size 1 and were illegible, but produced a densely packed area of grey on the page. Only one copy of the book exists in this format. After spending such a vast amount of time writing it I decided to produce a second edition. In this version all the words are a uniform font size, making it readable but pointless.

It is now available here to be read by anybody with the patience and inclination: One_Hundred_to_One.pdf

According to Andrew Grice; ‘One Hundred To One’ is a stream of consciousness from an individual’s viewpoint that covers opinions and thoughts on a wide range of issues. The work would appear to offer a glimpse into an individual’s brain, providing a glimpse into the thought processes that everybody experiences. The content of the text is diverse, ranging from ruminations on issues of universal significance and importance, to thoughts on more mundane topics. Opinions, memories, and unusual associations all blend together in this unique work that provides an insight into the unusual workings of the mind. The style of writing that the author employs serves to increase the impact of events described. Both style and general appearance of the text is highly distinctive, with the lack of punctuation throughout the duration of the manuscript proving a unique approach that immediately grabs attention. Incorporation of a style of this nature is highly appropriate for the text, as it reflects the unstructured nature of thinking and reinforces the central theme of the novel. Omission of punctuation also enables the readers to decipher the text individually, opening up the possibility that different interpretations of the text will develop.’

Here are various other wordy works.

Please keep in mind if reading any of these works that the views contained in them are not necessarily those of the author, just because I thought it and wrote it does not mean I agree with it. Often I have written deliberately provocative or meaningless things just to fill the white space of the page.